Two Birds with One Stone... 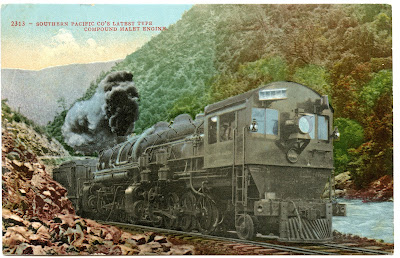 This post card shows how the Southern Pacific Railroad solved two challenges with one design. The first, and most obvious is the fact that this engine is not running backwards. The front of the train is to the right, where the cab is. In the northern California routes, especially through the Sierra Nevada mountains, the engineers' lives were being threatened. As the locomotive entered the various tunnels, the smokestack led the way. As they continued through the tunnel there was no place for the smoke and gases to escape. The train crew had to drive right through the heavy pollution, breathe in the poisons and, perhaps succumb to lack of oxygen. The solution to this was to move the cab forward. The fireman, in a coal-fired locomotive, was just below the smokestack rather than behind it; thus, he, too, avoided asphyxiation. The first cab-forward locomotive was delivered in 1908.
The second challenge that is solved in the locomotive shown on this post card was the need for power. Some of the grades the Southern Pacific faced were as much as 2.5%. Getting through the steep grades required either many engines linked together - or this solution. This engine is called a "Mallet" (pronounced mal-ay); it was invented by a Swiss (think lots of mountains) engineer Anatole Mallet who lived from 1837 to 1919. A Mallet engine has one boiler that is connected to two sets of driving cylinders; this is also called an articulated engine. What makes this a Mallet engine is that the steam goes through one set of cylinders (rear) at high pressure, the exhaust from those cylinders is at a lower pressure, but strong enough to still be used in the second set of cylinders (front set) before it is sent out the exhaust.

Again, this is an Edward Mitchell post card as indicated by the back of the post card. 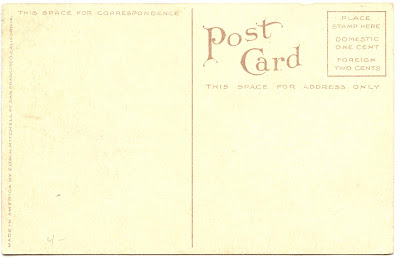