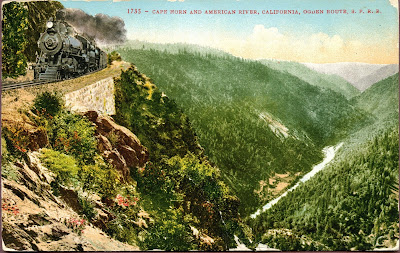 passenger could see while on the train. It is a view from Cape Horn looking at the American River in northern California (about 100 kilometers - 60 miles - from Sacramento). Many times the train would actually stop and let the passengers off so that they could admire the scenery and the view. While the notes on the front of this post card tell us that this view is on the "Ogden Route, S.P.R.R." (top right-hand corner of the front), this section of rail was actually built by the Central Pacific Railroad as part of the Transcontinental Railroad. Part of this article in https://www.sierranevadageotourism.org/content/cape-horn-and-the-transcontinental-railroad/sie3cf4cac0c3aa88ff9 tells us that "By September 1865, the Central Pacific Railroad had extended east from Sacramento as far as Camp 20, which was later renamed Colfax. The real assault on the Sierra Nevada began here. Colfax became a staging area for construction further uphill. Beyond Colfax, construction began in August 1865, with much of the basic work to Dutch Flat completed by year's end. Major obstacles remained at Long Ravine, Secret Ravine, and Cape Horn. Trestles bridged the ravines, but Cape Horn loomed forebodingly. At Cape Horn, aided by a veritable army of Chinese laborers, railroad engineers carved a roadbed around the steep peninsula high above the American River canyon. Construction took a year. More than 300 Chinese workers fell to their deaths in the process. This next article tells us that the "rumour" about Chinese labourers being lowered down in wicker baskets to do the drilling and dynamiting was exactly that - a RUMOUR. There is no truth in the matter. http://cprr.org/Museum/Cape_Horn.html In 1885 the Central Pacific Railroad was purchased by the Southern Pacific. This post card is definitely from after that year!!

The post card was printed and published by Edward H. Mitchell. He was a prolific post card printer, owning several printing companies in the San Francisco area. This back of the post card is very typical of what one of the backs of his post cards looked like. 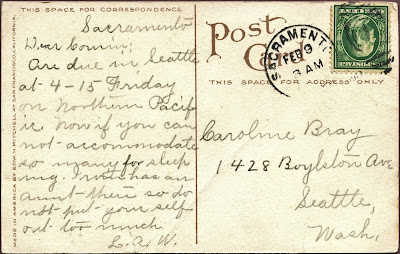