At first glance, the locomotive pictured on the front of this post card looks like it is pulling into Main Street at Disneyland. 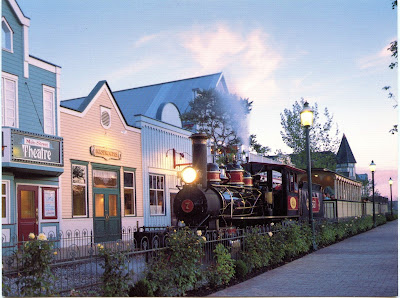 But, when I turn the post card over to read the description, I see that it is actually based closer to my home than I thought. It operates at the Silverwood Theme Park just north of Coeur d'Alene in Idaho. My research turned up a quaint bit of information: this theme park outbid Disneyland to purchase this particular steam locomotive. Unfortunately, the post card's description of the locomotive is that is it a "steam-chugging train" - period.

I had to go on line to see when it was built and by whom. Here is what I found:
The locomotive #7 is a 3-foot, narrow gauge built in 1915 by H. K Porter & Company. Henry Kirke Porter, along with this first partner, released the first steam locomotive on March 4, 1867. Their shop was in Pittsburgh, Pennsylvania and they only concentrated on building narrow gauge locomotives. Eventually, the company built almost 8,000 of them by the time the last one rolled off the line in 1950. Mr. Porter went through two partnerships until in 1878 he started H. K. Porter & Company. He was very successful because he used interchangeable parts to build his locomotives. A customer just had to come in and pick out the various sizes and shapes, etc., then wait while the company assembled the custom order. Mr. Porter died on April 10, 1921 while he was the 81 year old president of the company. 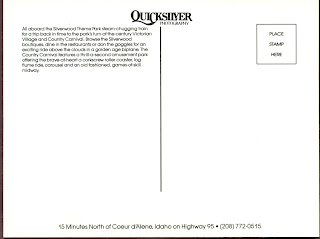 The post card was published by Quicksilver Photography. They are still in business in Coeur d'Alene, Idaho.
Posted by David at 5:00 AM

David
That is me in the vest on the railcar on our wedding day. We were married on the steam train in Fort Edmonton Park. I have over 3,000 post cards to share with you. This may take a long time, but I think it will be worth it!!