This is the third in a series of three related posts. They are all post cards of trains related to the current Burlington Northern Santa Fe Railroad (BNSF). These three post cards have pictures of trains from the companies that merged to form the BNSF. The train in this post card is a Santa Fe passenger consist passing through the Cajon Pass. 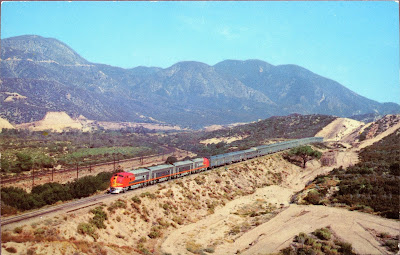 This pass is notable because it was with the completion of this pass that gave the Atchison, Topeka and Santa Fe Railway the status of transcontinental railroad.

Fortune magazine named the Atchison, Topeka and Santa Fe Railway (Santa Fe) the Nation's Number One Railroad in 1948. The Santa Fe was the only transcontinental train route from Chicago to Los Angeles until December 22, 1982 - when the takeover by the Union Pacific Railroad of the Missouri Pacific Railroad became effective. The Santa Fe railway The Santa Fe was the brainchild of Cyrus K. Holliday. He helped to found the city of Topeka in Kansas and quickly realized that the city needed to be connected to the rest of the country in order to thrive economically. Being a lawyer by trade, he wrote the charter for the Atchison and Topeka Railroad Company in 1859. It's purpose was to connect the two cities (Topeka and Atchison) by railroad as it followed the route of the Santa Fe Trail. The charter was approved by the Kansas Territory governor Samuel Medary on February 11, 1859. Holliday was named a director and president of the new railroad on September 17, 1860. The company was given the right to raise one and half million dollars in stock, which the board realized could only be raised through the selling of land rights. Through the normal political machinations, the Santa Fe was included in the Pacific Railroad Act of 1863. When the Act was signed by President Abraham Lincoln on March 3, 1863 the Santa Fe received the odd numbered sections of land for ten sections in width on each side of the track. The name of the company was also changed in 1863 to include “Santa Fe” because it seemed like Cyrus Holliday’s dream could come true. In 1867 Holliday was successful in raising funds within some of the local counties when they $350,000 worth of bonds. In 1868 the company purchased 338,766 acres of land from the Potawatomi Indians, which lands provided financial support when the lands were then resold to the new settlers. With these finances and the charter in hand, a ceremony was held on October 30, 1868 to celebrate the beginning of the building of the railroad. By 1870 gross revenue reached $127,000. The railroad reached the town of Atchison on May 13, 1872; you can imagine the celebration that day!! When the company was included in the Pacific Railroad Act, the grant of all that land was contingent on the rails reaching the border of Colorado before March 3, 1873. Granada, Colorado was reached on December 28, 1872 – 3 months to spare! The company continued to expand and grow attempting to reach the Gulf of Mexico and the Pacific Ocean. There were many challenges to overcome, some were geological, some were financial (though not significant), and some came from the competition. Most notable of these was the Colorado Railroad War between the Denver & Rio Grande and the Santa Fe railroads – which was won in court by the Santa Fe. By 1879, the railroad’s net income was $3.5 million. On November 15, 1885, the day that the final track work over the Cajon Pass in southern California was completed, the Santa Fe officially achieved transcontinental status. While the railroad was the brainchild of Mr. Holliday, that child was brought to life, nurtured and grew strong thanks to the efforts of William Barstow Strong; he was elected vice president and general manager in 1877 and spearheaded the developments that led to the completion of the transcontinental railroad. 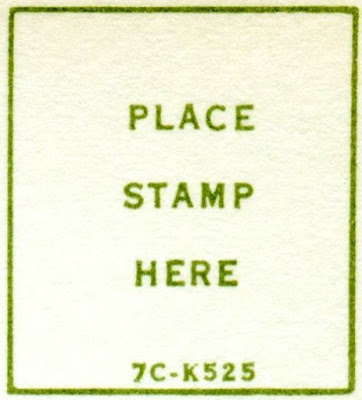 I know that it was 1957 because the "Place Stamp Here" box has a Curt Otto Teich code in it: The post card was printed by a Curt Teich company. That is what the dividing line between the message and address tells us.
It was published by Western Publishing & Novelty Company out of Los Angeles, California. The company began in 1932 with a focus only on Southern California related tourist materials and post cards; it ended sometime in the 1970s. 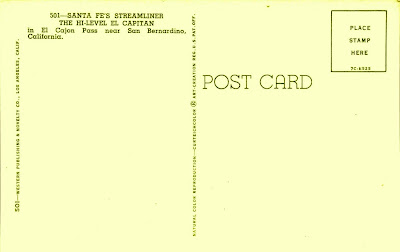