The title at the bottom of this post card says, "THRILLING ONE ACT 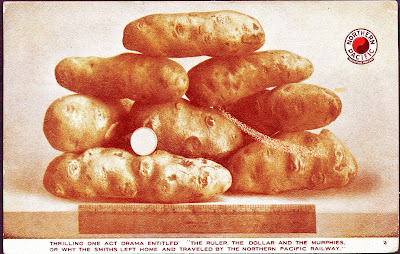 DRAMA ENTITLED "THE RULER, THE COLLAR AND THE MURPHIES. OR WHY THE SMITHS LEFT HOME AND TRAVELED BY THE NORTHERN PACIFIC RAILWAY." I found this to be a rather enigmatic sentence. I can see the connection between the ruler and the dollar coin; they are there to give perspective to the size of the potatoes. Even having said that, I believe there may have been some "graphic design" liberties being taken regarding the actual sizes of the elements. On the other hand, I have seen some rather large Idaho potatoes. This picture may be legitimate!! No matter. The picture and the phrasing got me to do some research. Here is what I found:
....1) The post card was mailed on May 13, 1910 so I looked up the dollar coin that was circulating in 1910. The coin was 38.1 millimeters (1.5 inches) in diameter - take a look at the ruler and coin; it is accurate! - and 2.4 millimeters thick. It was composed of silver (90%) and copper (10%). The mints in Carson City, Denver, New Orleans, Philadelphia and San Francisco all minted the coin. It is called the Morgan dollar coin because it was designed by George T. Morgan. This website contains lots of information about the history of the dollar coin: https://en.wikipedia.org/wiki/Morgan_dollar
....2) Who are the Murphies? My research has shown me that the Murphies being referred to on this post card are NOT PEOPLE at all. It turns out that Murphy is slang for potato! Between 1820 and 1930 4.5 million Irish people immigrated into the United States. Between 1820 and 1860 they were 1/3 of all the immigrants and in the 1840s they were half of all immigrants. Murphy was a common name shared amount the Irish immigrants. People started to say that the Irish were as plentiful as potatoes. The next leap in parlance was to simply call the potatoes Murphies.
....3) The logo in the top right-hand corner is that of the Northern Pacific Railroad. The railroad charter was approved by Congress in 1864 and it stretched from the Great Lakes to the Pacific Northwest. It had almost 11,000 kilometers (6,800 miles) of track when in 1883 former US president Ulysses S. Grant drove in the last spike. The route through the Pacific Northwest took the track right into the heart of potato growing farmland. Thus, using the potato on the front of a post card with their logo makes perfectly good sense. In fact, the phrasing at the bottom, not so subtly, suggests that you follow the Smiths' good example and take the train to the land of potato plenty.

The back of the post card is trying to continue the potato theme.

Spud is another nick-name for potato. And, notice that Doctor Spud is on the Scenic Highway through the Land of Fortune? This is the same location through which the Northern Pacific Railroad just happened to have been laid. This is the entire back of the post card: 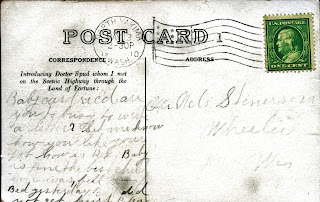 One last interesting item on the post card. Look again at the top picture of the front of the post card. There is a small dot in the bottom right-hand corner. I could not make it out with my large magnifying glass, so I blew it with my scanner.