In England They Call Them Tramways 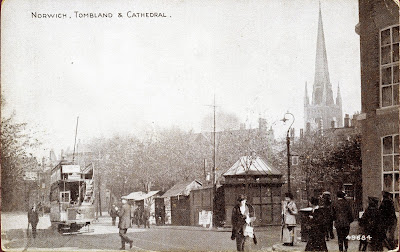 Company was a subsidiary of the New General Traction Company. Construction work started in June 1898 and first routes opened in July 1900. An electricity generating station was built on Duke Street to supply power for the scheme. The tram depot was on Silver Road. The network was essentially complete and fully operational by the end of 1901, but there were minor additions and changes in 1918 and 1919. The fleet, in a livery of maroon and ivory, initially consisted of 40 Brush open top double deck tramcars and 10 open top double deck trailers. In 1933 the Eastern Counties Omnibus Company bought the tramway system and began the process of shutting it down and replacing it with motor buses. The last tram route to close, in 1935, was Newmarket Road to Cavalry Barracks. Thank you, Wikipedia, for your historical records.

The post card was published by the Photochrom Company Limited out of London and Tunbridge Wells, England. This firm originally produced Christmas cards and became a major publisher and printer of tourist albums, guide books, and postcards 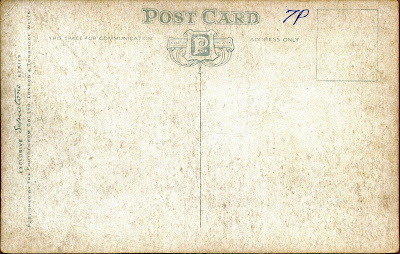 that mostly captured worldwide views as real photos or were printed in black & white, monochrome, and color. They also published many advertising, comic, silhouette, novelty, panoramic, and notable artist signed cards in named series as well. The number of titles Photochrom produced may exceed 40,000.major publisher and printer of Canadian view-cards. These cards were made as black & white, monochrome, and tinted collotypes. In 1896 they took over Fussli’s London office established three years earlier and began publishing similar photo-chromolithograpgic postcards after securing the exclusive English license for the Swiss photochrom process. This technique was used to produce a great number of view-cards of both England and Europe. While they captured the same fine details as the Swiss prints their pallet was much softer and reduced.
Posted by David at 2:59 PM