Last week I posted a bit of history of an electric trolley that traveled on either side of the Niagara Falls escarpment. At the end, I said that this week would be mostly pictures - with little commentary. Below are pictures (starting with the same post card as last week) from all the post cards in my collection that treat the theme of "The Gorge Route" at Niagara Falls. The only comments will be about the age and/or the publishers of the post cards. 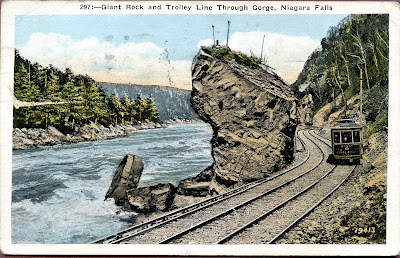 This one was published by the Miller Art Company and it was posted in the mail on June 29, 1925. 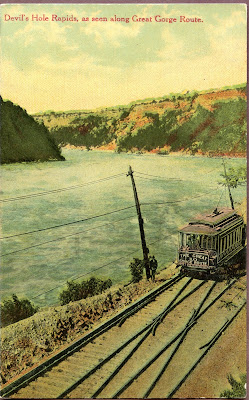 This one is from after March 31, 1907 and published by the Nicklis Co. of Niagara Falls; there was also a Nicklis & Lawrence Company of Niagara Falls (before March 1, 9017). I need to do some more research to satisfy my curiosity; I found something by Nicklis from as far back as 1895. 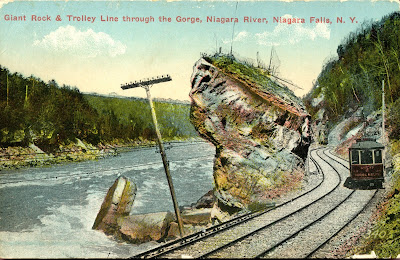 There are some symbols that hint at who the publisher might be... but I have not been able to decipher the clues. This is from between 1907 and 1915. Notice that the telephone pole that is in this one is missing from the 1925 post card, above. 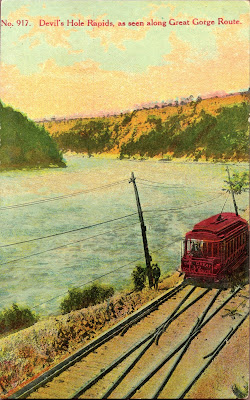 This post card is about the same age as the 2nd one, above, and the picture is the same one. A case of one publisher "borrowing" from another. This is from between 1907 and 1915. 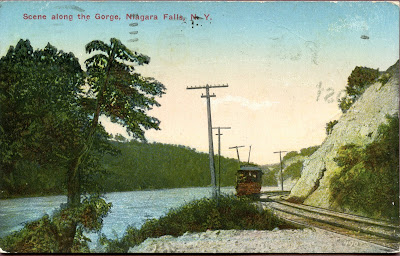 This post card is postmarked on September 8, 1915. It is by the same publisher as the 2nd post card above according to the heretofore undeciphered clues. 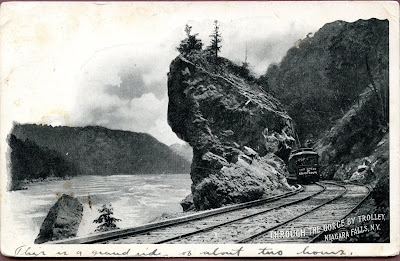 And, this final post card of "The Gorge Route" is the oldest on of the set. It is from before March 1, 1907 because it does not have a divided back. Only the address could be written on the back... as you can see by the very short handwritten message on the front at the bottom.