The front of this post card shows a bit of history that no longer exists. You are looking at one of 31 snow sheds built by the Canadian Pacific Railway 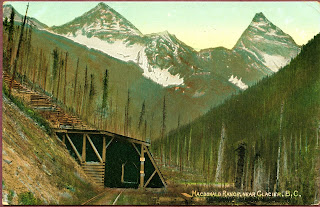 in the Roger Pass. When Major Albert Rogers discovered the pass through the Selkirk Mountains, the owners of the Canadian Pacific Railway were happy that an "easy" route through the Canadian Rockies had been found. He was rewarded with $5,000 and the fact that he would be the namesake of the pass he discovered.

The railway was built through Rogers Pass in 1884. In a previous post, last year, I showcased a post card of the Stoney Creek Bridge, one of the largest bridges on the CPR right of way. This was only one of many bridges that had to be built. The tracks also followed a series of loops in order to maintain a safe grade for the locomotives. Despite all of their efforts to avoid steep hills and avalanche areas, danger lurked each winter. So much so that after the winter of 1885 31 different snow sheds were constructed over a total of six and a half kilometers of tracks. Despite their best efforts, avalanches continued to wreck havoc on the railway. Eight people lost their lives when, in 1899, an avalanche took out a train station in the pass. The worse loss of life occurred on March 4, 1910 when the crew clearing out one avalanche were killed by a second avalanche that came from the other side of the tracks. Sixty two people died that day.

This is when the railway decided that it was the safest option to build the Connaught Tunnel. It was completed in 1916. The rails you see in this post card were abandoned and removed.

The post card was published by the Canadian office for Valentine’s of Dundee, Scotland. From 1907 to 1923 they published souvenir books, 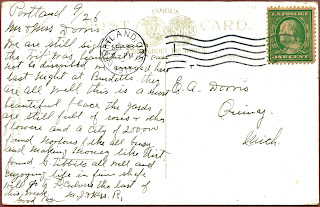 greeting cards and view-cards of Canadian scenery in sets numbered with a three digit prefix and a three digit suffix. These tinted halftone and collotype cards were printed in Great Britain. Valentine sold their Canadian branch in 1923. This particular card only shows (extremely faintly and covered with handwriting) that there were two offices in Canada: Montreal and Toronto. For a very short time they also had an office in Winnipeg.
Posted by David at 1:14 PM