Through the Selkirk Mountains

One of the conditions for British Columbia to join the Canadian Confederation was that Canada would connect the new province to the rest of the country by railway. Early in the negotiations a route for the railway was surveyed. The best route through the Rocky Mountains was determined 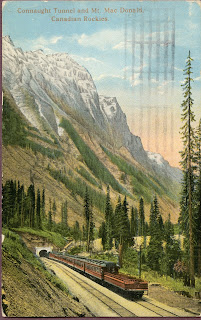 to be the northerly Yellowhead Pass route now used by the Canadian National Railway. However, by the time the Canadian Pacific Railway was established in 1881, a more southerly route was desired. There were several reasons, three of which were: 1) a railway across the southern part of Canada would help to guarantee not being taken over by the United States; 2) the southern route would be shorter and, thus, save money; and 3) the majority of the population of British Columbia was in the south of the province.

The first part of the newly chosen route leaving the prairies included going through the Kicking Horse Pass. But, that was all of the planning that had been done. As the railway progressed across the prairies toward the mountain the CPR was getting desperate to find a route through the Selkirk Mountains. Major A. B. Rogers was hired in April 1881 by the CPR to find the route through a pass in the Selkirks. He was promised that the pass would be named after him and he would receive a bonus of $5,000 if he would find a way to get through the mountians. Rogers' survey party started out from what is now Revelstoke and went up the Illecillewaet River. It took them two summers, but in 1882, he discovered that the longed for pass really did exist. He was presented with a cheque for $5,000 and the pass is truly named after him.

The trains first went through the pass in winter in 1886. The heavy snows of the pass that winter were taken as a warning sign by the CPR. The first defense was to build wooden snow sheds along the route. However, dried wood in the summers receiving a shower of sparks from passing steam locomotives proved them to be a fire hazard. It wasn't until 62 men were killed in one avalanche while clearing snow from another avalanche in 1910 that the CPR decided to construct a tunnel through the mountain. The construction of an eight-kilometer tunnel under Rogers Pass and through Mount MacDonald was begun in 1912. The Connaught Railroad Tunnel opened in 1916.

It currently sits in what is known as Glacier National Park and can be reached using the Trans-Canada Highway. 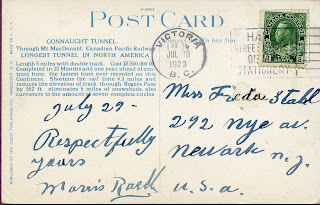 By looking at the back of the post card we can see that it was posted in the mail on July 30, 1923; that makes it 96 years old! There isn't much of a message on it, but we can see that it was sent from a man, who happened to be in Victoria, BC to an unmarried woman in Newark, New Jersey. I googled the address and today there is a two story apartment building sitting at that address. The post card was published by the Coast Publishing Company. They were at 318 Homer Street in Vancouver from 1907 until into the 1950s. They were a publisher of view-cards and cards of Native Americans. Their first cards were issued as tinted halftones and they latter moved on to linens, and then photochromes. All their cards were printed in the United States. Today, that address is very close to the Gastown Steam Clock in Vancouver, British Columbia.